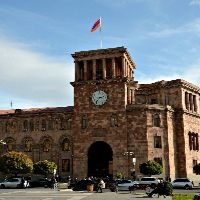 Yerevan City Tour
We begin our city tour of Yerevan, the capital of Armenia. Older than Rome, Yerevan is one of the oldest cities in the world. After a visit to the city’s history museum we move on to the remarkable Matenadaran Library. It is one of the world’s oldest repositories of Greek, Persian and Arabic manuscripts with over 17000 rare items in its collection. Later, we’ll have the opportunity to taste Armenia’s favourite drink, cognac, during a tour of a brandy factory. 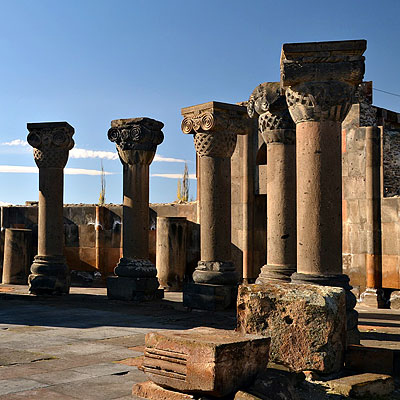 Day Tour to Ejmiatsin - Zvarnots
Leaving Yerevan, we drive to the centuries-old UNESCO listed monuments of Ejmiatsin and Zvartnots. The Cathedral of Ejmiatsin, constructed in 303AD, is still an official residence of Armenian Catholicos. Today’s itinerary concludes at Zvartnots, the Temple of Vigil Forces or Heavenly Angels, constructed from the 7th century onwards. 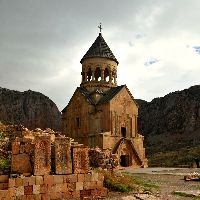 Visit Noravank Monastery
We will visit Noravank - a twelfth century monastery perched on a lofty ledge in a sheer cliff face. The monastery is best known for its two-storey Surb Astvatsatsin (Holy Mother of God) church. From it, a dramatic view of a meandering gorge makes it worth the trip. 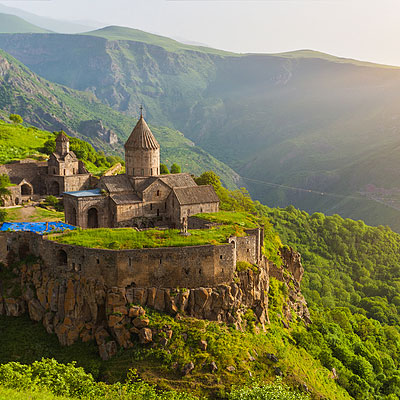 Guided Tour to Khor Virap Monastery
We pay a visit to Khor Virap Monastery, which dates from the 4th century. This monastery is associated with Gregory the Illuminator, who’s the person credited with introducing Christianity to Armenia. It’s here that you can enjoy a spectacular view of Armenia’s most enduring symbols, sacred Ararat Mountain